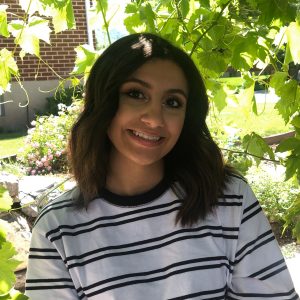 For me, the concept of wellness has evolved with age. When I was younger I probably would have defined wellness along the lines of Maslow’s Hierarchy of Needs, and although I still agree with this definition of wellness, it now encompasses more than just the basic needs to survive and focuses more so on mental health and my personal matrix of intersectionality. As a Palestinian-American, muslim, girl growing up in East Milcreek Utah- I grew up with a drastically different idea of wellness than my peers probably did and my multiple identities are to thank for that.

I am just one of three daughters of Middle-Eastern immigrants. My parents were both born in Kuwait but their families are originally from Palestine. My dad’s family comes from a village right outside of Tulkarm and my mom’s family comes from Jenin, a neighboring village. In the late 1940s and early 50s both of my grandfathers left their homes in Palestine to find work in Kuwait, where the oil industry was booming. However, when they tried to return home, Israeli occupation forces did not let them return home and they were forced back to Kuwait where they faced severe discrimination under the Kuwaiti government. Even though my parents were born in Kuwait, they were treated like second class citizens which is one of the reasons why my dad chose to attend school in America. After receiving his Bachelor’s degree from a university in Kansas or Missouri, he returned to Kuwait only to be met with the Gulf War shortly after. My mom’s family had moved to Jordan before the war started but my dad’s family met a different fate. They lived without electricity for months and had to build a bomb shelter to protect themselves from Saddam Hussein’s raid. One day while climbing into the shelter, a missile flew over my dad’s head barely missing him. As you can probably guess, my definition of wellness was significantly influenced by these events.

As Palestinian-Americans, my sisters and I were taught that the only way we could succeed in life was through education, and this was similar for many people who shared the same identity as us. Palestinian people don’t have a country and we have to rely on education to make a livelihood for ourselves as we are being erased from maps and left out of history books. My grandparents grew up in poverty because they were olive farmers who made a living for themselves during olive harvesting season, which unfortunately is not year-round.  Wealth and income was always a facet of wellness and wellbeing in my home because my parents did not have a “comfortable” lifestyle growing up, and they had to make a lot of sacrifices because of this. For example, my mom opted to complete her associates degree rather than her Bachelor’s because she wanted her younger sisters to have the chance to attend a four-year institution. Similarly, when my dad’s and uncle’s business took off in America, they sent money back home so they could pay for their parent’s medical expenses as they got sick with age.

Although my Middle-Eastern identity has contributed to my definition of wellness. My American identity has also had some influence. In Middle Eastern culture, depression, anxiety, and suicidal thoughts are still taboo. However, as someone who suffers from extreme anxiety, I put mental health and mindfulness at the forefront of my wellbeing and I thank my American identity for this. I think that the media doesn’t accurately portray what it’s like to be taking antidepressants. It wasn’t until recently that I learned of a show, Bojack Horseman, that portrayed the side effects of taking these medications in a positive light. I personally have been on and off Lexapro for about two years now and my weight has fluctuated and declined as a result. Although I have never watched the show myself, Bojack Horseman had a main character that gained weight due to taking antidepressants and they redesigned her character to maintain her new figure without making a single joke about her weight gain. I think oftentimes we see gaining weight as a bad thing but in this case, it’s a symbol of her recovery and a sign that she is healthy.

Another way in which the media falls short on portraying wellness is that they feed consumers the idea that wellness and self care means treating yourself to a day off work, treating yourself to some fancy facial, going to brunch with the girls, etc. This idea of wellness is not easily accessible to people that are dependent on their jobs, have kids to raise, and can’t afford luxurious ways to take care of themselves. Instead, I think the media’s response to wellness shouldn’t focus on materials and rather focus on mindfulness- something I learned from my therapist.

Mindfulness is the calm state of being conscious and aware. In this state, you can realize where you are holding your stress, anxiety, or other troubles and this has been incredibly therapeutic for me! I held a lot of my anxiety and stress in my chest. It wasn’t until I made several trips to the doctor due to extreme chest pain that I was diagnosed with anxiety. My body has a difficult time responding to antidepressants so I am opting for more natural methods to combat my disorder and mindfulness is something that I can do on my own time without spending a dime!

As I have grown with age, I have found other ways to practice wellness that fit my lifestyle as a college student. I love to paint and have always used it as a medium to let loose but I lack the time for that now, instead I paint my nails which is drastically different than painting a canvas. I will say though that the small motions of moving the brush do soothe me and I paint my nails at least three times a week as a way to relieve some stress. Another way in which I practice wellness is by closing my textbooks and picking up a novel- a short escape from my problems without leaving the comfort of my own bed. Lastly, I will cuddle with my cats! Just petting them gives me a boost of serotonin! I highly recommend investing in a furry friend to take some of your worries away!