Get ready for a blog post full of acronyms!

October is Domestic Violence Awareness Month (DVAM). The National Coalition Against Domestic Violence (NCADV) began observing DVAM back in the ’80s as an effort to get domestic violence (DV) service providers collaborating and problem-solving. Since the ‘80s, advocates have continued mobilizing communities to promote DV awareness and prevention and improve the support available to victim-survivors.

This year at the U, departments across campus have been hosting healthy relationship classes, gathering letters for survivors, creating art installations, and boosting awareness about domestic violence in other creative ways. As a queer woman and an advocate for victim-survivors of DV, I want to contribute to DVAM efforts this year by centering our awareness on the impact of DV on LGBTQ+ members of our campus community.

What does it mean to center LGBTQ+ experiences when talking about DV?

First, let’s take a step back: what do we mean by DV? DV can refer to several types of intimate partner violence (IPV- there’s a bonus acronym!), including dating violence and stalking. DV doesn’t necessarily have to include marriage, cohabitation, or sexual history. DV also doesn’t necessarily have to include physical abuse. DV can look like an ex-partner calling 18 times in one hour and threatening to come over if they don’t get a response. DV can look like a current partner isolating their partner from friends and family and insisting on having constant access to their location or not allowing them to go anywhere alone. The specifics of DV vary from case to case, but at the most basic level, DV is about “one partner’s consistent efforts to maintain power and control over the other” (https://ncadv.org/learn-more). With this context, we can start to “queer” our understanding of DV. 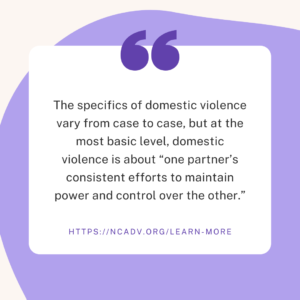 We typically raise awareness of DV through a very heteronormative lens, meaning the experiences of cisgender, straight people are front and center. This narrative implicitly and explicitly portrays the victim-survivors as straight, cis women and the perpetrators as straight cis men. Intersections of age, race, and disability also appear in these narratives since the characters often tend to be middle-aged, white, and nondisabled. This heteronormative narrative informs our DV policies, practices, and program. For example, we set up women-only DV shelters, pass out brochures for victim-survivors that only feature women and feminine pronouns, and write laws that only apply to male perpetrators. These approaches reinforce the myth that LGBTQ+ people don’t experience and make victim-survivors invisible.

In reality, people of any gender or sexuality can experience domestic violence. The NCADV says, “Because the majority of the domestic violence awareness movement has focused on heterosexual relationships, members of the LGBTQ community have been largely left out of the movement. However, recent research shows that LGBTQ members fall victim to domestic violence at equal or even higher rates compared to their heterosexual counterparts.” Check out some supporting statistics on NCADV’s website. Let’s take a closer look at some of the specific ways DV impacts LGBTQ+ people.

The SafeHouse Center created a Power and Control Wheel for LBGTQ+ Relationships that centers LGBTQ+ experiences with DV. This graphic provides examples of how abusive partners attempt to gain power and control and exploit vulnerabilities specific to their LGBTQ+ partners. For example, this graphic points out how abusive partners can threaten to “out” their partner, which could damage their social support system and isolate them. Abusive partners can also do emotional harm with statements like “no one else will ever love you like I do, because you’re not a ‘real’ man/woman/lesbian/etc.” which reinforces internalized homophobia, shame, and dysmorphia. 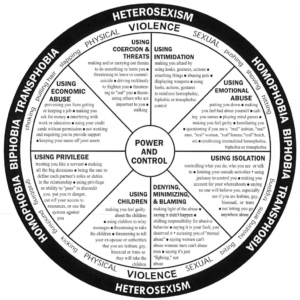 Our domestic violence awareness movement needs to include LGBTQ+ experiences and avoid perpetuating the harm inherent in heteronormative approaches. So, how can we make our prevention efforts more inclusive, and how can we better connect LGBTQ+ victim-survivors with quality resources? Systemic change will take a lot of time and advocacy, but here are some ways you can start making a difference in your community: 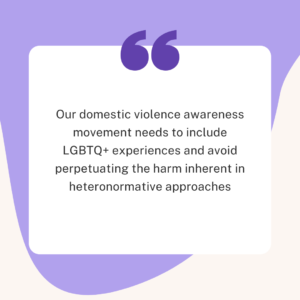 Thanks for reading! And thanks for being willing to do the hard work it will take to make our campus a place where people of any gender or sexuality can feel safe and supported.

*A note about language: language is important. The terms we use to describe the LGBTQ+ communities are constantly shifting and adapting to become more inclusive. To recognize a diversity of genders and sexualities, I include the “+” in the acronym I use here.