The Center for Violence Prevention is a recent addition to campus organizations, having launched September 22nd of this year. However, director Dr. Chris Linder has been a part of the University of Utah’s campus for years. Her interest in the study of interpersonal violence has brought her to the realization that previous methods of violence prevention, though very impactful, are focused more towards the after math rather than the causes. “The first documented study of examining sexual violence including sexual harassment [on college campuses] was done in 1957, and in fact rates of violence have not changed since,” Dr. Linder said during the virtual launch, citing this as one of the reasons behind the creation of the new center. Through virtual correspondence, we reached out to Dr. Linder to gain better understanding of the goals and intentions of the Center for Violence Prevention and have shared her responses below.

Q: Is there specific meaning behind your word choice in naming your organization?

We intentionally chose “prevention” because we are working to address violence before it starts. The vast majority of college campuses have been forced to spend the majority of their time and resources responding to violence after it happens, rather than stopping it from happening in the first place. A good, trauma-informed response is essential for supporting survivors in their healing and recovery processes and for intervening with perpetrators to stop them from enacting violence again, and so is intervening far before the violence occurs to stop it from happening in the first place. There are other groups on campus addressing continuing to improve our response (and we will support their efforts), and our focus will remain on primary prevention – stopping violence before it starts.

Q: Your organization has put an emphasis in studying and intervening specifically perpetrators, why is this demographic especially important when discussing violence prevention as a whole?

See above – and also, if victims could stop violence from happening, we would have done so a long time ago. The people responsible for ending violence are the ones who are enacting it.

Q: How representative of a sample is the University of Utah when considering relationship/sexual violence (RSV) on college campuses around the country? What have you noticed about attitudes towards RSV at other universities?

The issue of relationship and sexual violence plagues our society as a whole, and college students specifically, in unique ways. There is no reason to believe that the University of Utah is different than most campuses when it comes to students’ experiences with RSV. Certainly, each campus has its own unique culture, requiring interventions to consider a number of factors in the intervention, and yet, we also quite similar. Generally speaking, people have a very difficult time thinking about how to stop violence from happening in the first place. When I ask people to think about violence prevention, they automatically move to response (e.g., reporting) or to teaching people how not to get victimized. Few people actually consider that we might influence perpetrators or potential perpetrators by changing their perspectives and behaviors.

Q: What are your thoughts on the role of police in violence prevention?

Over the past several years, I have been working to create awareness among people interested in addressing RSV about the differences between response, awareness, and prevention. It’s interesting to me that whenever I ask even the most astute and engaged people what they think of when they think of RSV prevention, they immediately go to response factors, like reporting to police or other “authorities.” This troubles me on many, many levels. First, it insinuates that there is no way to stop violence – that it is inevitable and that it is just something that needs to be managed or dealt with, rather than eradicated. Next, it also perpetuates an unquestioned, assumed shared value: that our goal should always be to get people to report more. As someone who worked directly with survivors as a victim advocate for 10 years, I can tell you that the vast majority of victim-survivors do not want to report their experience to police or any other authority. In some cases, this is certainly because the victim-survivor has heard or experienced harm perpetuated by the very people who are supposed to help address situations of violence. However, in many cases, it is also because the victim-survivor just wants the person to stop. I can’t tell you the number of times I sat with survivors who said, “I don’t want him to get in trouble, I just want him to stop.” I believe being victim-centered and trauma-informed means that we listen to these survivors and we stop pressuring them to report the experience they had to any authorities that they are not interested in reporting to. Instead, we should spend time, energy, and resources to figure out ways to engage perpetrators and communities in transformative and restorative justice to create communities in which violence is unacceptable. Of course, for victim-survivors who do want to report to police, we should work with police to create the most trauma-informed processes possible. Honoring decisions of victim-survivors is an important part of their recovery processes, so we should do everything we can to support and validate whatever decisions survivors make in the aftermath of trauma.

Q: In reference to education and intervention for perpetrators, what would convince someone who has perpetrated RSV not to do it again?

In many cases, perpetrators may not understand that the behavior they are engaging in is harmful. Further, some survivors may not identify the experience as an experience of harm or violence until much later. That sounds absurd, and yet, our collective failure to teach young adults about healthy sexual behaviors results in continued harm and violence as people try to figure out how to engage in healthy sexual relationships. In the book, Sexual Citizens, Jennifer Hirsch and Shamus Kahn argue that failing to teach kids and adolescents about how to engage in healthy sex is similar to giving kids cars to drive without drivers education. We would not do that. We take responsibility for teaching kids how to drive to prevent at least some accidents. Similarly, teaching kids and adolescents about healthy sexual behaviors may help them understand how to communicate about their sexual desires and boundaries with each other. Removing the shame from talking about sex may result in people communicating more openly with each other about what they want and need, resulting in less confusion and harm as people try to figure it out.

Clearly, not all perpetrators are just confused. Many also use power and coercion to get what they want, no matter what the person they are engaging with wants. In order to address this type of perpetration, I believe we need to change the peer culture surrounding entitlement and sex. Some research indicates that heterosexual men who perpetrate sexual assault do so because they believe that this is what their peers are doing and that coercing people to engage in sex is appropriate and typical behavior. In these cases, the way to address perpetration is to shift the understanding of appropriate behavior and help heterosexual men understand that, in fact, most of their peers engage in and want to engage in healthy sexual behaviors.

Understanding perpetration patterns among college students requires much more research, which is something that people affiliated with the CVP will begin engaging in right away.

Q: What are some of the ways your office plans to highlight the increase of RSV within minoritized communities?

While it’s true that perpetrators target people with minoritized identities at higher rates than their peers, it’s also important not to put the onus on stopping this violence on those minoritized communities alone. Discussing this topic is difficult because the conversation frequently shifts to a deficit perspective – one that asks, ‘what is wrong with those groups that causes this to happen?’ rather than ‘what is going on in our culture that contributes to this?’ Oppression – in all of its forms – is tightly wound with violence. Relationship and sexual violence are no different. Existing in an environment where access to resources for daily survival is limited of course contributes to increased violence – in all forms. Feeling powerless in systems that were not designed with you in mind (i.e., institutions of higher education) may very well contribute to people enacting violence as a way to access power. This is a complicated topic, yet it is one that we can no longer ignore.

To address issues of oppression and RSV, we will do two things:

Q: Are there any main offices the Center for Violence Prevention will be working the most closely with?

The CVP is working to be intentional about moving beyond the “usual experts” around this topic. Similar to addressing many issues that plague our society, we believe that creative, innovative solutions to complicated problems exist among people who have never been asked their perspectives. You may note that the CVP Advisory Board consists of more students and staff than faculty. This is intentional – students and staff who do not do “violence” work in their every day jobs have unique perspectives to share, which may contribute to a more nuanced and complicated approach to the problem. “Experts” have been working on this issue for decades, and yet, rates of RSV have not changed among college students since the first study was done in 1957.

All of that to say, we will certainly be working closely with the Center for Student Wellness who does a number of programs related to RSV awareness, prevention, and response, as well as other groups dedicated to this issue, and we also hope to partner with other groups – groups that may include people with unique and different perspectives for addressing RSV.

Q: How would a professor, faculty member, or organization leader best reach out to request to either receive training or partner for violence prevention related topics? 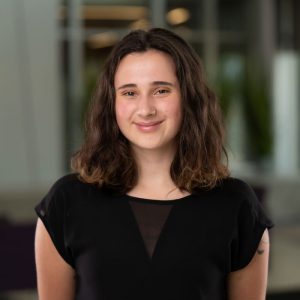 Tayler Bseiso is a Salt Lake City native and is majoring in Microbiology. She is an ACES Peer Health Educator on the Violence Prevention team. Additionally, they are serving as the co-chair for Domestic Violence Awareness Month this year.